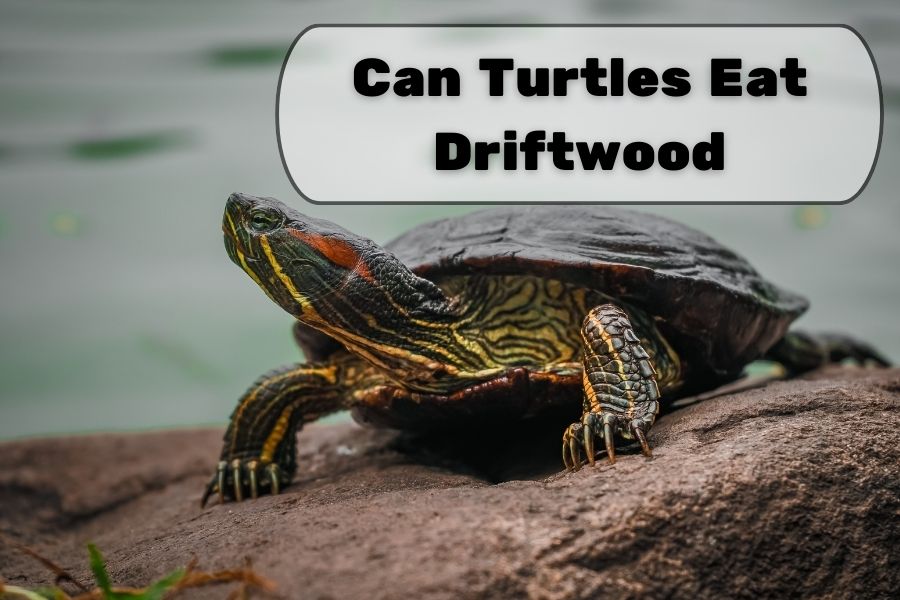 Adding driftwood to an aquarium is common because it has many benefits. Turtles are commonly kept as pets in aquariums, so it’s essential to know if it’s a good idea to add driftwood to a turtle aquarium. I will explain whether turtles can and will eat driftwood in this article.

Driftwood contains virtually no nutrients, so turtles won’t eat it by choice. Below, I will explain if driftwood is OK to put in the same tank as turtles, why turtles can’t eat driftwood, and finally, end with what things you should not put in a turtle tank.

Is Driftwood OK for Turtles

Driftwood will discolor the water for about a week before the water goes clear again. And it does slightly change the chemistry of the water in a fish tank. Therefore, here’s whether driftwood is safe for turtles.

As a general rule, driftwood is OK for turtles. Driftwood naturally releases tannins into the water over time. Tannins will lower the pH and make the water slightly more acidic. But, not enough to have any detrimental effects on turtles.

There are also no adverse effects that putting driftwood in an aquarium has on turtles. In some cases, due to the algae, and beneficial bacteria in an aquarium, driftwood won’t reduce the pH at all.

One person has reported anecdotally that:

“It is the tannins that help to lower pH; however, over time the tannins slow down and the pH begins to rise back to its normal level. I have something like 50 pounds (22.7 kg) of driftwood in my 125G (45 liters) tank. And the effect is negligible on pH.” (source: Fishlore.com)

One concern with natural driftwood is it can contain bacteria and parasites. And there is a slight chance a turtle will catch these. However, provided you boil the driftwood for a few hours, it will kill anything harmful to turtles.

Driftwood you find when out and about in nature can be okay. However, some species of trees are not suitable for an aquarium.

The reason is that the wood contains toxins or is too soft and will break down too fast. I explained what wood can be used in an aquarium in this article about whether you can have too much wood in an aquarium.

Otherwise, you can get driftwood from a pet store. These have been specially prepared so that they are safe to use in aquariums.

If you’re unsure about how to prepare natural driftwood to put in an aquarium for turtles, refer to the video below:

Why turtles will chew on driftwood

Driftwood is not part of the normal diet of turtles. However, people with pet turtles have noticed that turtles will chew on driftwood from time to time. The reason turtles do this is to wear down their beak.

A turtle’s beak can also get uneven if they don’t have something to wear it down on. For example, the upper ‘lip’ can grow longer than the lower part, and this can cause issues for a turtle and make it difficult for them to eat.

However, in general, turtles won’t eat driftwood to feed themselves. The majority of turtles eat plants and meat. Turtles will eat insects, meat, fish, fruits, and vegetables. Driftwood is unappetizing to turtles and contains virtually no nutrients. So, they will only chew on it for one of two reasons: if they are bored or to wear down their beak.

Tannins are released slowly by decaying plant matter such as leaves, branches, logs, and driftwood. These tannins will mix with the water in an aquarium and modify the chemistry of it slightly. But do tannins hurt turtles?

They also don’t cause any other negative effects in ordinary amounts. It’s possible that you could add far too much plant material to a tank which would spike the levels of tannins. Doing so would lower the pH and make the water too acidic for turtles.

But, provided you add a normal amount of plant matter to an aquarium, it won’t affect the acidity of the water.

Or, add too much plant matter all at once. For example, if you add 2 large pieces of driftwood and 3 handfuls of leaf litter all at once. It’s best to take it slow when adding plant matter to an aquarium if you have the desire to do so. Doing so, will give time for the tannin levels to even out, and not get too high all at once.

What Should You Not Put in a Turtle Tank

Turtles have unique food and habitat needs. There are a range of items you can put in an aquarium, but it’s important to know whether some of these are harmful or not. So, here’s a complete rundown of what you should not put in a turtle tank.

Turtles will eat fish. Therefore, you should not keep other fish that you want to keep in the same tank as turtles.

Also, there is no requirement to have substrate in a turtle tank. But, it can look particularly good. If you want substrate for your turtle tank, then sand is a really good option. Or river stones that are too large to fit in their mouth. Ceramic ornaments are also fine in a turtle tank.