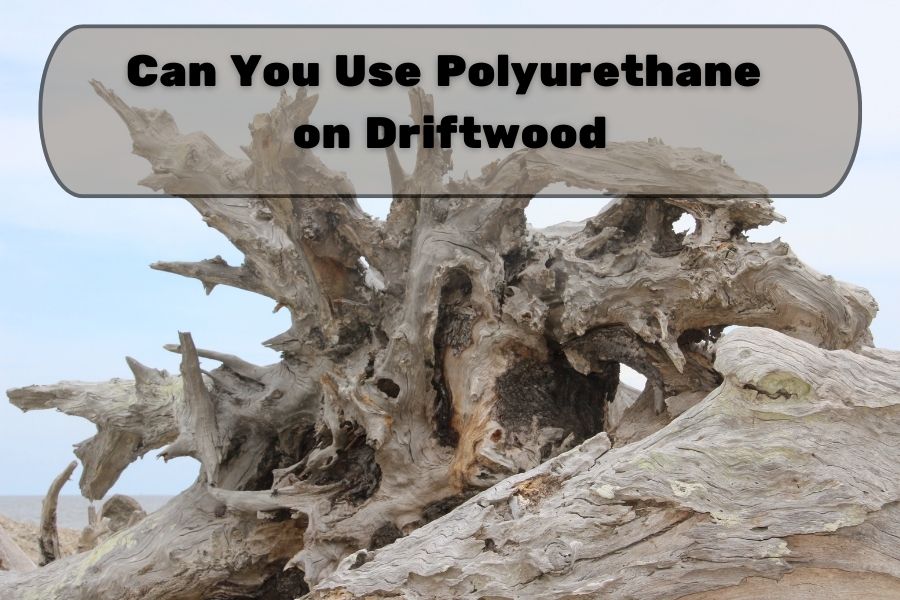 When you add a piece of driftwood to an aquarium, it releases tannins which discolor the water and make the water more acidic. Some types of wood can not be used in an aquarium because they contain toxins. So, today I will explain whether it’s OK to seal driftwood using polyurethane.

Polyurethane, also called simply urethane, is commonly used to seal a wide variety of materials to make them water resistant. However, polyurethane will break down if certain chemicals are applied to it.

I will provide a full summary of whether it’s OK to put polyurethane in a fish tank, if it’s necessary to seal driftwood before putting it in an aquarium, and how to stop tannins produced by driftwood from getting into aquarium water.

Can You Put Polyurethane in a Fishtank

As a general rule, you can put polyurethane in a fish tank. However, polyurethane lasts 5 to 10 years. Therefore, you can expect some degradation of the polyurethane sealant over that time. Overall, avoid using polyurethane to seal driftwood as it’s not required.

Therefore, if you apply it to a piece of driftwood, it will keep it water-tight for 5 to 10 years. If you have other ornaments that have a polyurethane coating, they can also be put in a fish tank.

The one caveat is if the aquarium has turtles. Turtles have been found to try to eat anything in the tank, including pebble substrate at the bottom of the tank and plastic plants. They also chew on driftwood to sharpen and wear down their beak. If turtles ingest polyurethane it will generally cause digestive issues, and in large amounts can kill them.

Polyurethane is a liquid that is applied to something using a spray gun, paintbrush or rag. Once it dries, it forms a layer of plastic that is waterproof. A dry piece of driftwood will float for about half a day (12 hours). Therefore, before sealing it with polyurethane, it needs to be soaked in water so that it stays at the bottom of a fish tank.

This is a very important step because if you do not do it, the driftwood will float and won’t be usable. In general, soaking driftwood for a few days to a week is enough time so that the driftwood won’t float.

According to The Journal of Light Construction, polyurethane will cure wood that has a maximum moisture content of 25%. For some types of driftwood, you may find polyurethane won’t cure on it. This is because the driftwood is very dense, and requires a lot of water to sink.

Reasons to seal driftwood with polyurethane

But, other than that, it can be a good idea to coat a piece of driftwood in polyurethane if:

Not all species of wood are good to put in an aquarium. Any driftwood purchased from a pet store is safe to use in an aquarium. But, if you find some driftwood at a beach, river, or lake, it’s generally not a good idea to use it for two reasons.

Softwoods are bad for aquariums because they break down too fast. Also, some species of wood have toxins in the wood. These get released into the water and can poison any animals in the water.

The species of tree that a piece of driftwood is, is hard to identify without a microscope, which you may not have. A microscope is used to examine the grain. Each type of tree has a unique grain.

Even if you can be somewhat sure what kind of tree it came from, it will be a guess. Therefore, if using a piece of driftwood that you find in nature, it’s a good idea to seal it with polyurethane. Unless, you can identify it with 100% certainty.

The other main reason is if you don’t want to remove the tannins. As you may know, when you add a piece of driftwood to an aquarium, it discolors the water.

The main method to remove tannins from a piece of driftwood before putting it in an aquarium is to boil it for about 10 hours. And replace the water when it gets reasonably dark.

How to remove tannins and discoloration from aquarium water

READ MORE: How Long to Boil Driftwood to Remove Tannins

How Do You Stop Driftwood Tannins

Driftwood tannins will discolor the water in an aquarium and are also mildly acidic. Both of these are generally undesirable for a fish tank. So, here’s how to stop driftwood tannins.

Overall, boil it for around 10 hours in water. Another option is to seal it with polyurethane. However, removing the tannins by boiling it is a better option overall. The general procedure to remove the tannins from driftwood is to boil it in water and change the water until the water remains clear.

Boiling driftwood has the added benefit of killing any parasites and a large percentage of bacteria. Driftwood that is fairly dry will also float. Boiling it in water will cause the driftwood to soak up a lot of water. This will cause a piece of driftwood to stay at the bottom of a fish tank rather than float.

Should You Seal Driftwood for an Aquarium

It’s possible to put driftwood in an aquarium without sealing it. But driftwood does release tannins and will grow algae and fungi. Therefore, this is whether you SHOULD seal driftwood for an aquarium.

In general, you should not seal driftwood for an aquarium. Unless you do not know what species of tree a piece of driftwood is, and you sourced the driftwood from nature. Driftwood from a pet store does not need to sealed, and won’t serve any purpose.

The reasons are that sealing driftwood won’t allow the beneficial nutrients in the wood to get released into the water. Also, common sealants such as polyurethane last for about 5 years. During this time, some of the sealant will wear off and be present in the water.

link to Petrified Wood: The Fascinating Process of Fossilization

Petrified wood is a type of fossil that forms when wood is buried and preserved over time. The process of petrification occurs when the organic materials in wood are replaced by minerals, usually...

Continue Reading
link to How To Use Driftwood In The Garden

Aside from aquariums and art, driftwood is also popular in gardens. Driftwood is appreciated for its unique shape and texture and may give your garden a unique look. However, how do you integrate...