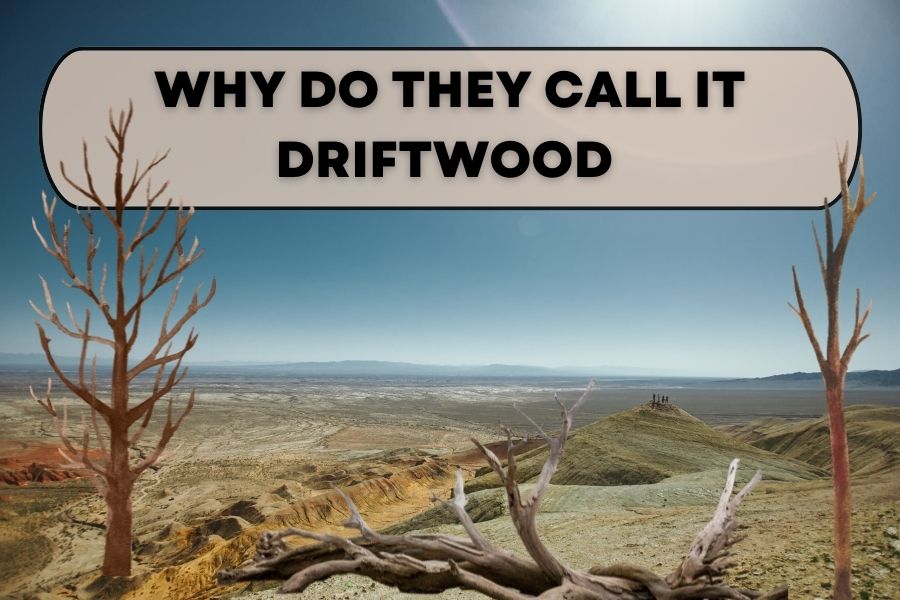 Driftwood is old, dead wood that has spent some time in the water. It loses its bark and typically turns a lighter shade than regular wood. It can be discovered in rivers, streams, creeks, or even on beaches. However, why exactly is it called driftwood?

Any piece of wood that has spent time getting carried by water is called driftwood because it has been drifting. The wood is polished by the movement of the water, rocks, and sand, giving it a distinctive appearance. No particular wood species is known as driftwood, as it can be any species.

It might be anything from a bit of bark to a large portion of the trunk or a limb. As seen, driftwood wasn’t created by humans. Here’s what to know about why it’s called driftwood.

Why Driftwood Is Called Driftwood

Each piece of wood, regardless of species, that has been deposited into a vast body of water like the sea, or an ocean, where it remains for a considerable amount of time while being tumbled repeatedly along a shoreline, becomes known as driftwood.

However, why is it called driftwood? If you look at the word drift, the meaning is when something is carried or drifts along slowly by a current of water or air. As a result, driftwood is called driftwood because the wood pieces are being drifted along by the water.

Because of this, any edges that were previously bumpy and damaged, sharp, etc., are now worn smooth. Driftwood eventually finds its way to the coast. This is where the tides eventually drop the wood after carrying it sufficiently far into the land.

Merriam-Webster editors observe language in use to choose which words to add to the dictionary and to establish what they signify. They pay close attention to which words are used the most frequently and how they are used. Because of this, driftwood is prehistoric by definition.

Although it is not documented or clear who coined pieces of wood that were drifted by water driftwood, the term stuck and has been used worldwide for many decades. It is hypothesized that this term dates back to the olden days when shipwrecks would result in pieces of wood getting carried by sea and eventually finding their way to the shores.

For example, pallets of wood blasted off the decks of ships. During a gale, deck freight lumber would be blown off the ship. These wooden fragments become a part of the gyre, the ocean’s circulation system. They would eventually be carried thousands of miles away from their original location and wash up elsewhere.

They would have spent years at sea, and the environment progressively deteriorated them. Some would deteriorate and sink offshore, some would remain in the middle of the ocean in the center with a circular current flowing through, and some would make it ashore with signs of recent travel or maybe years at sea, hence driftwood.

How Does Driftwood Drift Without Disintegrating?

Any fungus that consumes moist wood and causes it to rot is known as wood-decay fungus. While some wood-decaying fungal species invade living trees as parasites, others target dead wood. Excess moisture over the fiber point of saturation in wood is necessary for fungal colonization and growth.

In the natural world, this process decomposes complicated molecules and replenishes soil nutrients. Different lignicolous fungi break down wood in different ways; for instance, some attack the wood’s carbs while others decompose lignin. The resistance of wood to rot varies substantially among different species of trees.

Two factors are involved. Firstly, most trees, even those from highly decay-resistant species, have very little decay resistance in their sapwood, wood nearest to the bark, and typically have a lighter hue. Secondly, how the tree has developed affects how many extractives are deposited in the heartwood.

The faster the growth, the fewer extractives are accumulated in the heartwood. Therefore, the lower the resistance to decay. Anaerobic means that oxygen is needed for the degradation process. Driftwood is naturally completely saturated because it has been floating in the water for a while; as a result, only the topmost layers of the wood are exposed to oxygen.

Rot isn’t something that happens to wood. Many different types of bacteria and other tiny creatures do it to wood. Wood will survive if it is submerged in water that, for whatever reason, doesn’t permit such bacteria’s growth. Low oxygen, no light, and cold water reduce this support of life.

Some driftwood will decompose quickly as it dries, and there isn’t much that can be done sans putting some effort into the drying process. Because the lignin that binds the log together cannot be dissolved by water, it has very little impact.

As was already stated, other factors that play a role include the tree’s species and the environment it grew in. In fact, wood can survive for tens of thousands of years when it falls into deoxygenated water, such as in a very large, deep lake or bog.

What Is Driftwood Used For?

It is used as decoration and to reduce the pH of the water in aquariums. It can also be employed in other crafts. People frequently take a component and turn it into a decorative item, like a table base.

It is not sawed into boards. It’s frequently utilized as décor both inside and outside the house. It truly makes a difference if you want a coastal or rustic style in your home.

Many know that driftwood is defined as wood that has drifted into the water and has been there for so long that all rotten materials have been consumed by bacteria, fungi, and some other pathogens, preserving only the cellulose.

During this point, driftwood washes up on a shore or occasionally sinks. However, not many were aware that driftwood is called that because it simply drifts along in large bodies of water and goes through a change along the way.